It all began in 1992 and ever since then the small town of Olathe, Colorado has played host to a festival celebrating the agricultural crown jewel of western Colorado, Olathe Sweet Corn! This small community gathering has continued to grow ever since and now more than 20,000 people every year travel to Olathe to what it is all about. If you are traveling from another area or are local to this valley, we hope you will consider staying with us for your Olathe Sweet Corn Festival lodging.

Olathe sweet corn was not always a major crop in the Montrose – Delta agricultural area. During the 1970s, Olathe was in the midst of terrible conditions agriculturally; demand for major agricultural crops – such as barley-were in demand no longer. The shops, grocery store, pharmacy as well as most other businesses were closing down or about to close. Olathe was dying. 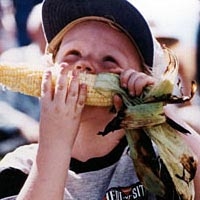 This all began to change when Dave Galinat with several varieties of sweet corn, moved his hybrid seed business to the Olathe area. Olathe has great weather for growing sweet corn, i.e. cooler nights and sometimes scorching hot days. John Harold, the mayor at the time met Galinat, and together with other farmers in the local area began harvesting Olathe sweet corn. The “Tuxedo Corn Company,” became a massively successful organization. The success of his Olathe Sweet Corn is the reason that the area once again became prosperous, stores reopened, and Olathe again had a strong pulse. Celebration was in order and thus began the Olathe Sweet Corn Festival and the rest as they say is history.

Oops! We could not locate your form.